We had the Hino Festival on May 3rd, and I cooked Tai Somen which is a dish we eat during the festival. It is a somen noodle cooked in soup with a sea bream. It is one of Kyodo Ryori, local cuisine that I talked about in the book IKIGAI DIET. 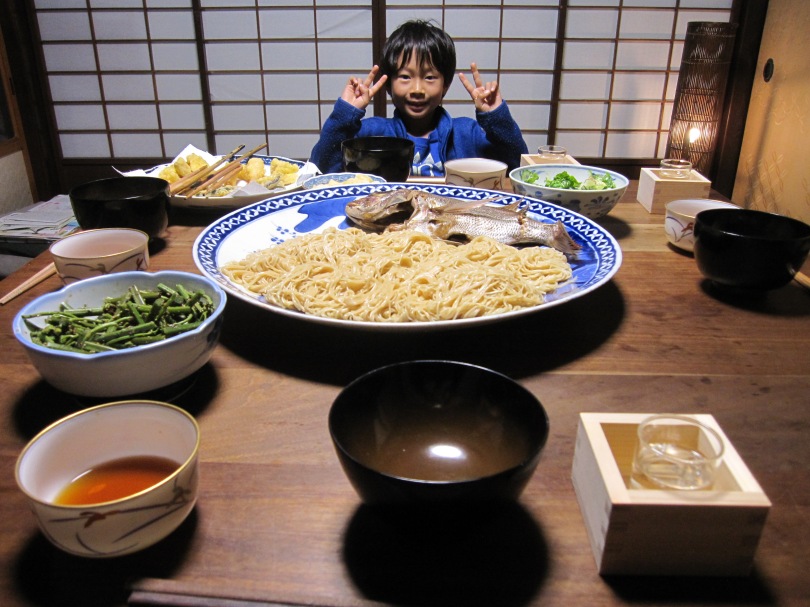 Today, let me tell you the other reason I stopped following the macrobiotic diet. During my 4 years of living in England I was exposed to and immersed in the alternative culture there, where I studied about Steiner, psychotherapies, natural medicine, and was involved in peace, environmental, and spiritual movement. Toward the end of my stay, I felt saturated with the NewAge culture, and had the urge to get away from the whole thing and experience so-called the ordinary life. Changing my diet was part of such a move, and first I stopped eating macrobiotic food and eventually I stopped being a vegetarian.

When I came back to Japan, I let myself see the opposite side of the world: I was walking on the street of Akasaka and Otemachi in Tokyo with my suit on, surrounding myself with yuppies from Citibank, IBM, and Merrill Lynch.

It added a lot in my life which helped me later on when I became a novelist. To write novels, you need to describe scenes from different points of view depending on your character, which I couldn’t have done, had I continued to stay in the alternative world.

Also, I could never stay in one particular circle. Whether it was Steiner circle, Shiatsu and macrobiotic circle, Findhorn, or Ericksonian Hypnosis and NLP circle, each one of them didn’t complete my search to live a free and happy life. It led me to study something new, and I ended up meeting all kinds of people, experiencing different perspectives, which eventually helped me create ZENWSP.

So even though it seemed to be an act of descension by expanding my dietary options, I was somewhat going up in my spiral to find a way to build a world where everyone can be free and happy.